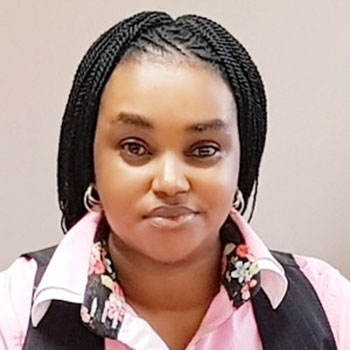 Malaika Oringo is the founder and CEO of Footprint to Freedom (2019), a survivor-led organization. She is a talented advocate and speaks up against human trafficking and stands up for victims’ rights and works to strengthen the survivor’s inclusion and engagement. She has spoken on various stages throughout Europe, such as in Paris, Geneva, Athens, London, Belgium, and Luxembourg. Raised in Uganda in harsh conditions and exploited in the Netherlands, she has devoted her life to fighting against human trafficking. She believes that since survivors are the most significant stakeholders in the fight against human trafficking, they should sit at decision-making tables from community level to national level and international level.  She has lobbied at the European Commission and spoken at the European Parliament about the gaps in the current approach human trafficking. She also advised on the best practices that can provide victim centered trauma informed and survivor centered approaches to improve response to survivors and victims’ needs.

She is a Member of the International Survivors of Trafficking Advisory Council (ISTAC) which assists the work of the OSCE Office for Democratic Institutions and Human Rights (ODIHR) in combating trafficking in persons.